STEVEN YATES
DRUMMER / VOCALIST
Steve has been in high demand as a drumset performer of funk, jazz, rock, latin, swing, & groove. He composes, mixes & masters music. He has served as a member of the WGI Advisory Board, founding & board member of the Rocky Mtn. Percussion Association & founder of the Blue Knights World Percussion Ensemble. He has worked with some of the most recognized drum corps icons. 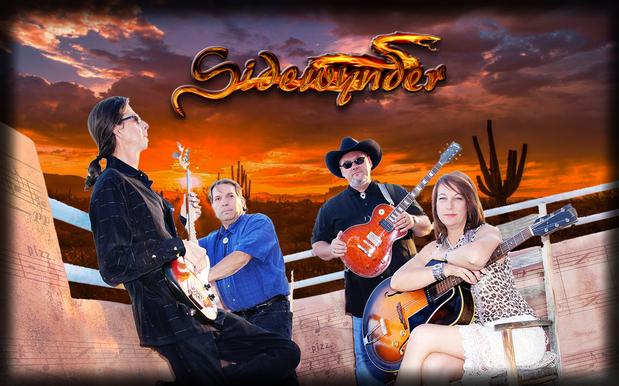 Billy has played in all types of groups, from gospel to hard rock, but mostly Top 40 dance bands such as Colors, G-Force, Adios Jones & The Joe Vasquez Band, and the band Push, to name a few.  Billy was inspired by the unique playing style of Nile Rodgers of CHIC.  He is the driving force in writing Sidewynder original songs. He was awarded Songwriter of the Year 2015 in the Lake Havasu Songwriter Festival contest.

Virgil started playing music in 6th grade in 1964,  singing and playing the tambourine with his first band “The Timid Knights” along with his great friend Bernie Larsen who taught him a couple of chords on the guitar, that started it all. Virgil continued practicing guitar as well as venturing into songwriting and audio recording. By 1983 Virgil and songwriting partner Jerry McClintock with their newly formed band “October” secured a recording contract with AVI “American Variety International” and recorded their first album of original songs at “Producers Workshop” in Hollywood. This it seems was like going to university for the music business. Learning the ropes of analog and digital studio recording, showcase gigs and regional promotional tours. Through the years Virgil has been involved in many projects including the “Instrumental-psycho-folk-jazz” acoustic guitar trio “Zeetrio” with his musical mentor and friend James Hurley, to being the utility man in the band “Dotz Machine” performing original and cover songs at regional events and local dive bars.

Jeanne is a singer/ songwriter/guitarist from the  California mountains.  She worked professionally for over 20 years as a Cabaret-styled solo artist. At a young age, she was professionally recording radio commercial jingles.  Jeanne toured with a 12 person, 3-part harmony elite group competing nationally performing A Capella in Italian, German, & English as well as choreographed "Doo-Wop."  Jeanne has the rich warm sounds of Patsy Cline & Karen Carpenter, as well as the gravelly, husky sounds of Janis Joplin.